A Basic Course of Theosophy 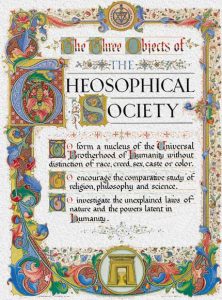 Three main areas of research and study concern the roots of modern Theosophy, the work of the Theosophical Society, and the main Theosophical teachings. Various articles and excerpts will form the basis of our study. We will look at the development of theosophical ideals throughout the ages from Pythagoras, Plato, Neo-platonism, Meister Eckhart, J. Boehme and more. We will explore the impact of Theosophy on the world in science, philosophy, religion, education and the arts; and ponder over the message of Theosophical leaders including past international TS presidents, about the essential nature of our work as a Society. We will then be guided through the foundational concepts of what it is called modern Theosophy, such as the ultimate reality; the manifestation of the universe; the laws of periodicity, cause and effect or karma, reincarnation, and evolution; the constitution of human beings, the macrocosm reflected in the microcosm, and others.

1- The Ageless Wisdom Tradition
The Perennial Philosophy in the World – The Roots of Theosophy in the West: Pythagoras, Plato, Neo-Platonism, Eckhart, Boehme and the Christian Theosophy.

2- Renaissance of Esotericism in the West
Founding of the Theosophical Society – General History of the Movement and its Influence on the Esoteric World – Theosophical Leaders – Impact of Theosophy on the world in Science, Philosophy, Religion, Education and Arts.

4- The Birth of the Cosmos
The Absolute Ultimate Reality – Unity and Diversity – Cyclic Model of the Universe – Manifestation of the Universe: The Seven Planes – The Hierarchy of Beings.

5- Man the Microcosm
The Seven Human Principles: The Deity in Man – A Mind to Embrace the Universe – The Lower Nature – Cosmic Powers reflected in Man.

6- The Process of Evolution
The Aim of Evolution – The Cycle of Necessity – Descending into Matter – Evolution through the lower Kingdoms of Nature – The Human Stage: Physical, Intellectual and Spiritual Evolution – Dharma – Towards a Supra-human Stage.

7- Death, After Death & Reincarnation
What Happens When We Die? – Stage of Purgation – Stage of Assimilation – Returning to the Physical Plane – Is it Possible to Reincarnate in Animals? Time between Incarnations.

8- Karma
The Law of Cause and Effect – Action of Karma on the Different Planes – Different Kinds of Karma – Purpose of the Karmic Effects – Is it Possible to change Karma?

The Yoga of Theosophy

11- Study
A Change of Perspective – Developing the Higher Mind – Study as a form of Yoga.

13-  Service
Developing Unselfishness – What is Service? – Different Levels of Service – Service as a Spiritual Practice.